Miami heat logo, has remained unchanged from 1988 – 1989 season. A fiery basketball falling through a hoop symbolizing the strength of Miami Heat franchise. 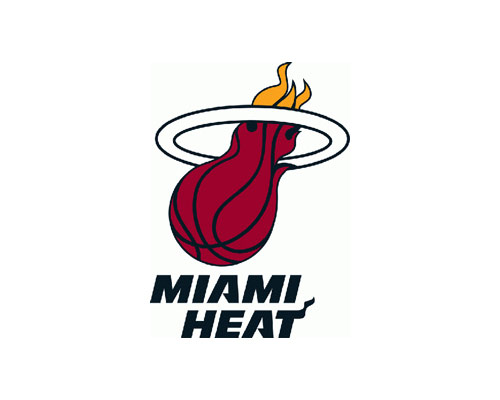 In 1999, Miami Heat logo went through a minor redesign, the structure and shape remain unchanged, but the color of the fiery basketball has changed to red color and the hoop has changed to white color.

The History of Miami Heat

The team based in Miami, Florida, United States. The team is a member of the Southeast Division in the Eastern Conference of the National Basketball Association (NBA).

Their home games are played at American Airlines Arena in Downtown Miami. The team is owned by Mickey Arison, coached by Erik Spoelstra and are managed by Basketball Hall of Fame coach Pat Riley.

In the NBA 1988-89 season, Miami Heat went through a very challenging year with full of young players and journeymen. The team finished this league with worst 16-67 win-loss record.

In 1989–90 season, Miami Heat picked Glen Rice in the first round of the 1989 NBA Draft, and Sherman Douglas in the second round to improve their low point production. However, they still struggling and never won more than 2 games continuously, it ended up with 18-64 win-loss.

In the 1995 offseason, Pat Riley from 1980s Los Angeles Lakers, was hired to become the team new president and coach.

In the last moment to the beginning of the season began, Pat Riley send Glen Rice and Matt Geiger to the Hornets in exchange for All-Star centre, Alonzo Mourning.

In the mid season, Pat Riley bought several players including Tim Hardaway, Chris Gatling and Walt Williams. The team begins to improve and become the most improved team in NBA on the following season. They have made a 19 game improvement and won their first Atlantic Division title with a 61-21 record.

After Miami acquired Dwyane Wade in 2003, the team acquired another superstar center Shaquille O’neil on July 14, 2004.

They both worked well together and the team had their second best record in franchise history 59-23 win, loss with 14 continuous victories, and won their first ever NBA championship in their franchise history.

From 2010 – present, with the team lead by Dwayne Wade, Le Bron James and Chris Bosh, Miami Heats door is opened with promising future.

The logo depicted on this page is a registered trademark. Use of the logo here does not imply endorsement of the organization by this site.

Previous: Who is That Silhouette in NBA Logo?

Next: Do You Know Who Created the First Adidas Logo? You Will Be Surprised